Loynaz Street was my personal proposal to Generous City, a project of the collective 4th Pragmatic Pedagogical in Havana Arts University, in which I was inserted from 2009 to 2012. The main idea of ​​this project was to build a kind of city open to all the people, where each member of the group had to conceive and manufacture his own house. A house to welcome visitors and invite them to stay, to talk and to live without pre-established time.

For my personal proposal, I was interested in the history of this small and almost forgotten park in the capital neighborhood of Vedado. It was part of the forest of Havana in 1880. The ruins that we can observe today belonged to the Trotcha Hotel, which construction dates from the late nineteenth century and was financed by Buenaventura Trotcha. The modernity of its facilities attracted the Commission of the American intervention in the early twentieth century, who were looking for a quiet place to stay in Havana. To complete the requirements imposed by US officials, an electric lighting system was installed in this hotel, possibly, the first in the country at that time.

Reading the private diary of Enrique Loynaz, brother of the poetess Dulce María Loynaz, I discovered that, during her childhood, she went to the gardens of the Trotcha Hotel to admire the electric light. This image would be the most alive memory of the childhood of Loynaz, present in her work. In the design of my house, I tried to link this story to the contemporary representations built by the neighbors of the neighborhood. My research on the Trotcha Hotel taught me that it had a large garden with roundabouts where visitors would settle at night to chat and relax in the glow of electric light bulbs. Therefore, I designed my house as a gazebo open for everybody, as a space on the border between public and private place. In its center, I placed a large polygon of glass surrounding a neon that suggested the filament of a light bulb. My goal was to return the light to a public space that had been left in the shade. Around this bulb, I placed wooden benches and straws, imitating those in the hotel at the beginning of the last century. On the floor of the gazebo there were two footprints of ceramic. Originally, these were my own footprints. However, after the ceramic burnt, they reduced in size, making them look like the footprints of a child, remembering Dulce Maria Loynaz when she came to admire the lights of the hotel. The poetess was somehow present in my space through these forms.

Three weeks before the inauguration of Generous City, the Cuban State denied us permission to work in the Trotcha Park, because it was located at one of the avenues taken daily by the President of the Republic. The organizers offered us a new park located a few blocks from there. My work was deeply tied to the history of the Trotcha Park, it seemed absurd to me to present it in the other park. Finally, I decided to install my gazebo in the second park, but creating a link with the other place through performances.

Every day I wore clothes similar to those used in the early twentieth century and read poems written by Dulce María Loynaz in my gazebo. At night, the light projected by the bulb attracted people who came to share stories, poems and moments. According to the name of our city, each artist should generously give a souvenir to the visitors. In my case, I gave them small mirrors, so that the visitor could play, expand and communicate with the light bulb reflections and, somehow, take some of the light from my house with them. The last day of Generous City, I made a performance to connect both parks. I went to Trotcha Park and walked among the ruins.

Performance Description: After a few minutes, I turned on a small flashlight I had in my hands. I walked and thanks to the light, I drew in the air my roundabout, the light bulb exactly where I had originally planned to install. With the light on, I made the walk for Generous City. When I arrived to the park, everything was dim, in order to metaphorically return the spirit of light. The moment I set foot in the gazebo, the giant light bulb turned on. I sat down and started to play with the light and the mirrors, depositing them on the floor around the light bulb. Step by step, the audience approached and spontaneously began to play with the reflections of light using their mirrors.

Loynaz Street, collective exhibition Generous City, 3rd and E, Havana, Cuba
Within the official framework of the XI Havana Biennial, 4th Pedagogical Pragmatics
With the support of the Higher Institute of Art in Havana, the National Art Council. 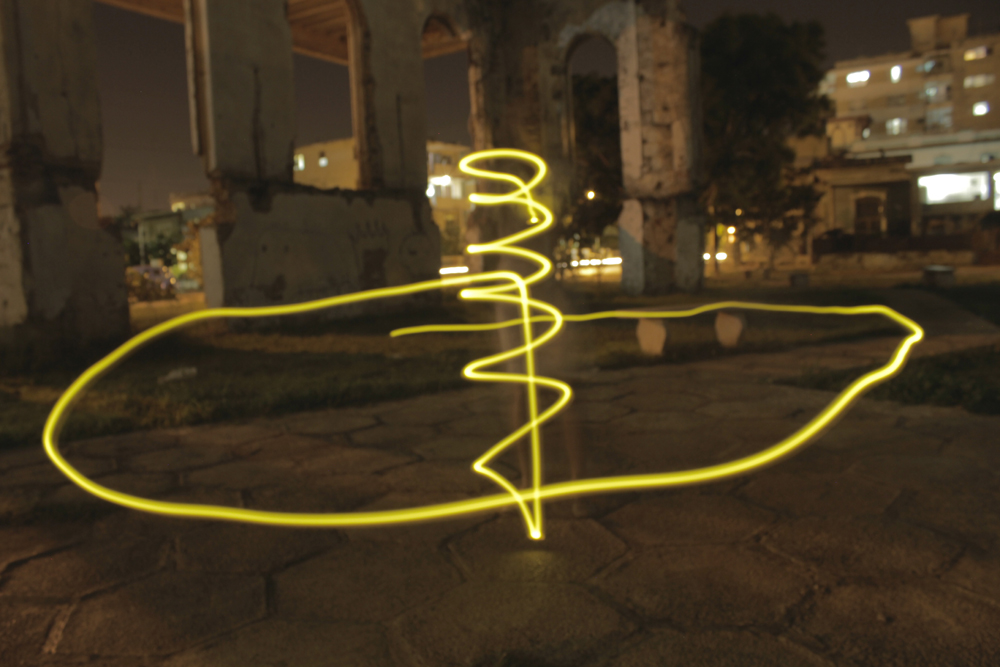