In the shade and with hats

In the shade and with hats

The work of Jenny Feal, a French-Cuban artist, has focused from the beginning on an historical past enriched by her imagination. Inspired by memories accumulated through encounters on her native island, she creates scenes that seem idyllic, but in which a discreet feeling of discomfort is silenced.

Jenny Feal recently travelled to the interior of Cuba, to Zaza, a small town in the province of Sancti Spiritus, 370 kilometers from Havana. It is a place where time has come to a complete standstill. The sugar mills are all paralyzed except for one survivor, and nature has taken over the poorly maintained fields. Here is where the small family of the artist began its history on the island, after leaving Spain in the early 20th century.

In this room with cold walls, the library/office does not aim to recreate a typically indolent atmosphere, but seems to be invaded by a strange poetry. The wall paintings are a reinterpretation of the superposition of layers of typical cheap paints used in modest Cuban interiors. These successive layers are witnesses of a past time, but they do not cease to exist. These pieces, which are constantly falling away, are part of a badly told story. This room is an evocation of the dreams and the dramas of a Cuban countryside that has been confiscated, frozen and at the same time mistreated and spoiled by a regime that does not cease to offer the peasants the use of the land, without giving them any real hope of being able to cultivate it. Is the productivity of a peasant also conditioned to his creativity? Or could one simply sit and let oneself be carried away by this wild nature that is the mind, without thinking about it, just looking at it? Could a library be composed of both, books and memories? Suspended and reinterpreted by the artist, this room is like a huge tropical dream library offered to the public. In relation to this stainless-steel vat, it is a cyclical transformation container. Metaphorically adapted to the exhibition ambient, this preparation has become a space for pause, discovery and a careful look to the processes that are taking place inside.

In the shade and with hats, it is an installation presented with elements loved by the artist: two hats, a hammock and a guayabera . These objects were built around a repetition of the combination of the colors red and white. The hats represent the yarey (straw) hat, incongruous in this interior space, in this cold and somewhat dark atmosphere, which changes with the natural light that invites to enter the room. Made of glass, these hats cool and freeze in this strange space. These hats are not there to protect from the sun, but to evoke it. They could also evoke the lack of human presence, the lack of someone’s head to wear them. The hammock symbolizes a fusion of two colors, red and white, which represent two opposite ideologies in Cuba. They are intermingled and designed to accommodate only one visitor at a time. The latter’s body is suspended to allow his or her thought to take over this library as a reading, inviting him or her to adopt another dimension of the space, to enter, somewhere, a little more. At the top, also hanging, a glass feather lets a red light to pass over the hammock. This representation of the individual plumage is similar to the human body of the spectator that rests slightly and horizontally, in the suspended hammock. The “pen” floats, without any problem, on the top of this air-filled vat, lightened by the ink that flows from it. Blood-colored ink, strange, and the story begins and ends there. This red ink witnesses a historical, symbolic, political and social violence, evidenced by a shadowy stain on the white cloth of the hammock. Once the visitor is on the hammock, the shadow of the red ink stain appears on the torso of the lying human body. Linked to this experience, a guayabera is placed as a vow, on a modest wooden shelf. She also has a red stain, this time well dispersed in the depths of this garment. Was it worn by a peasant? These everyday objects are part of an enigmatic story, of a disappearance. The spectator may think that this person will never return, because everything is absent. This library hasn’t a language written with words, but full of dusted poetry, empty and plain, intuitive without words. 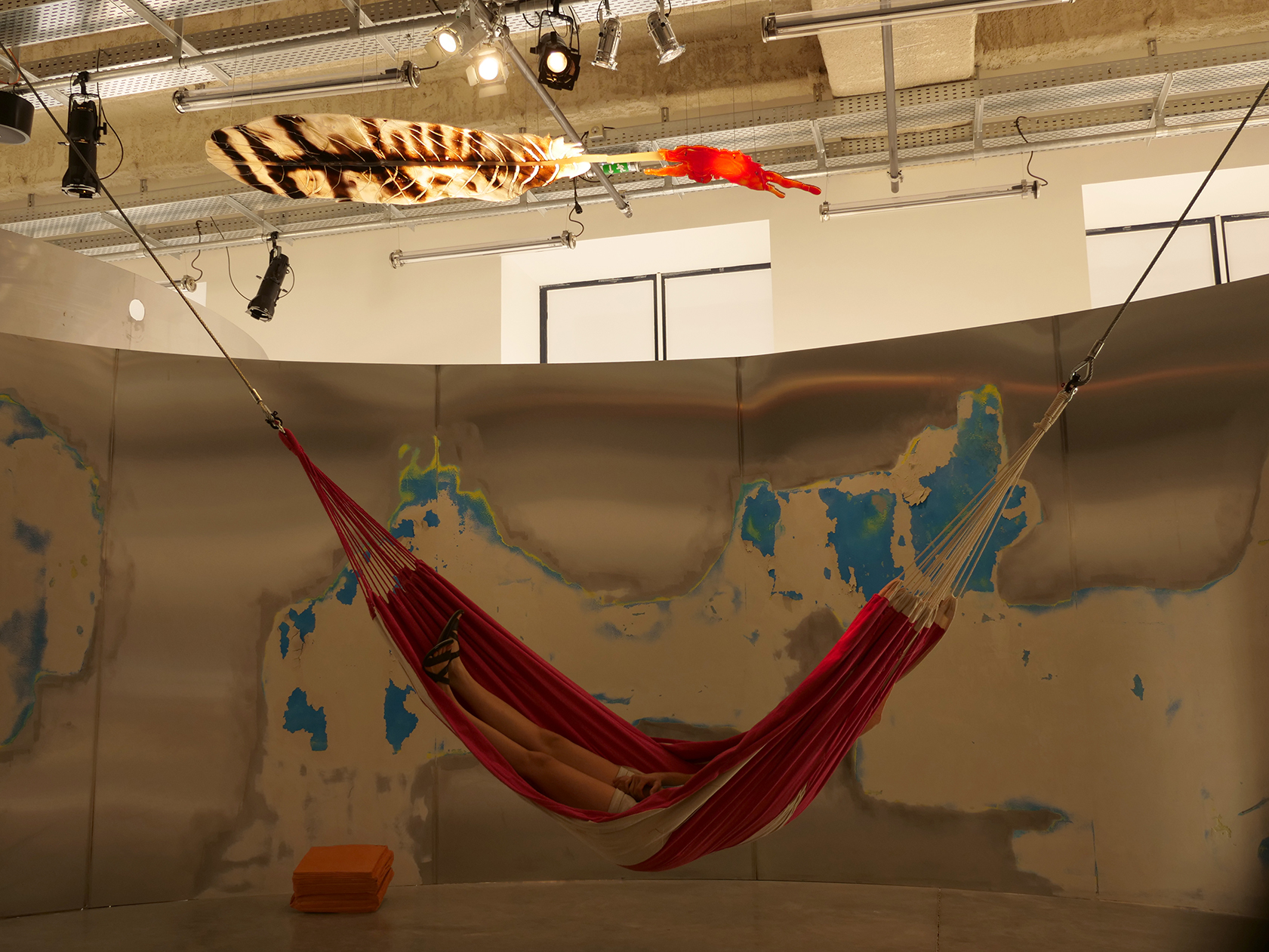 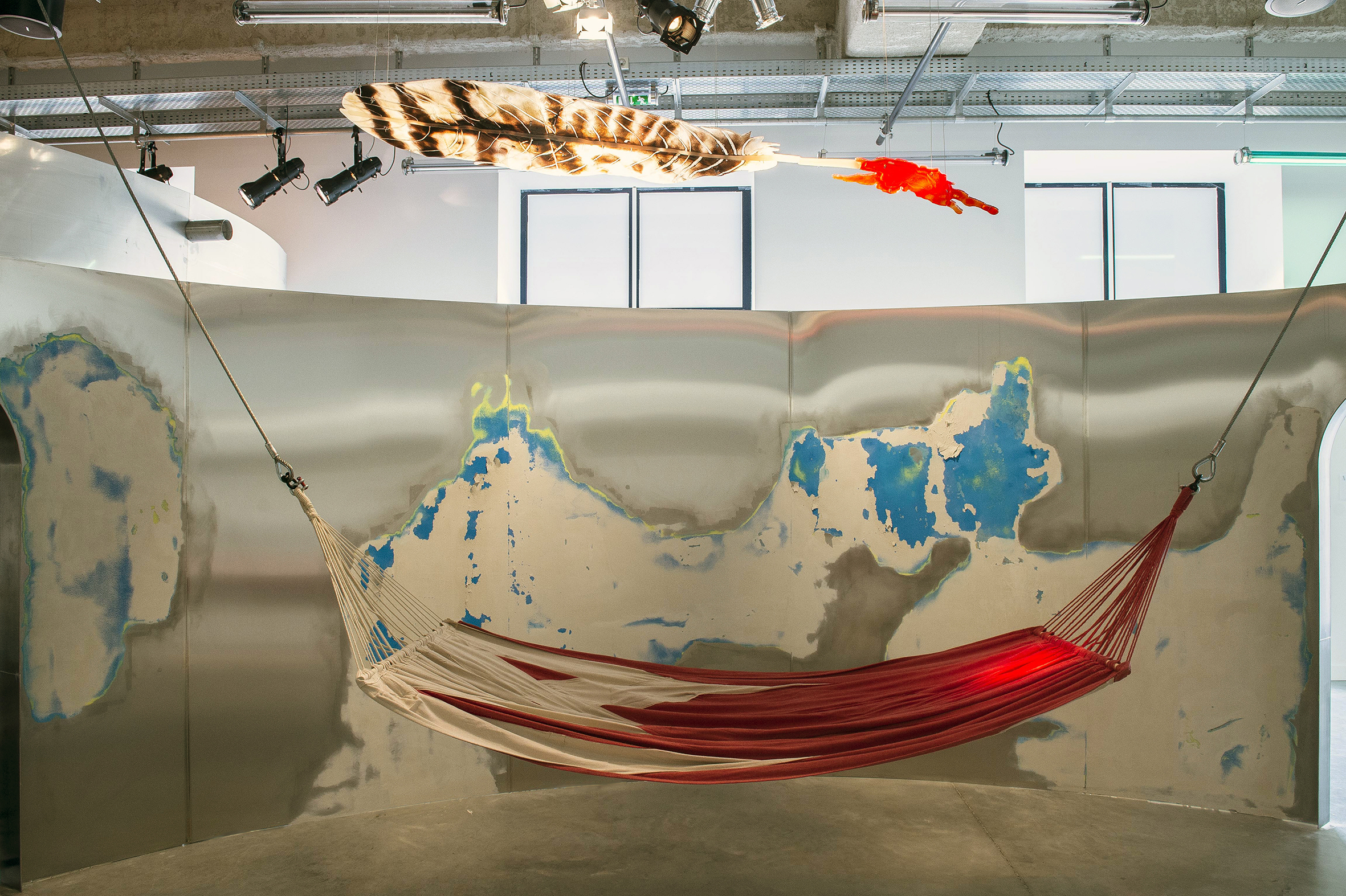 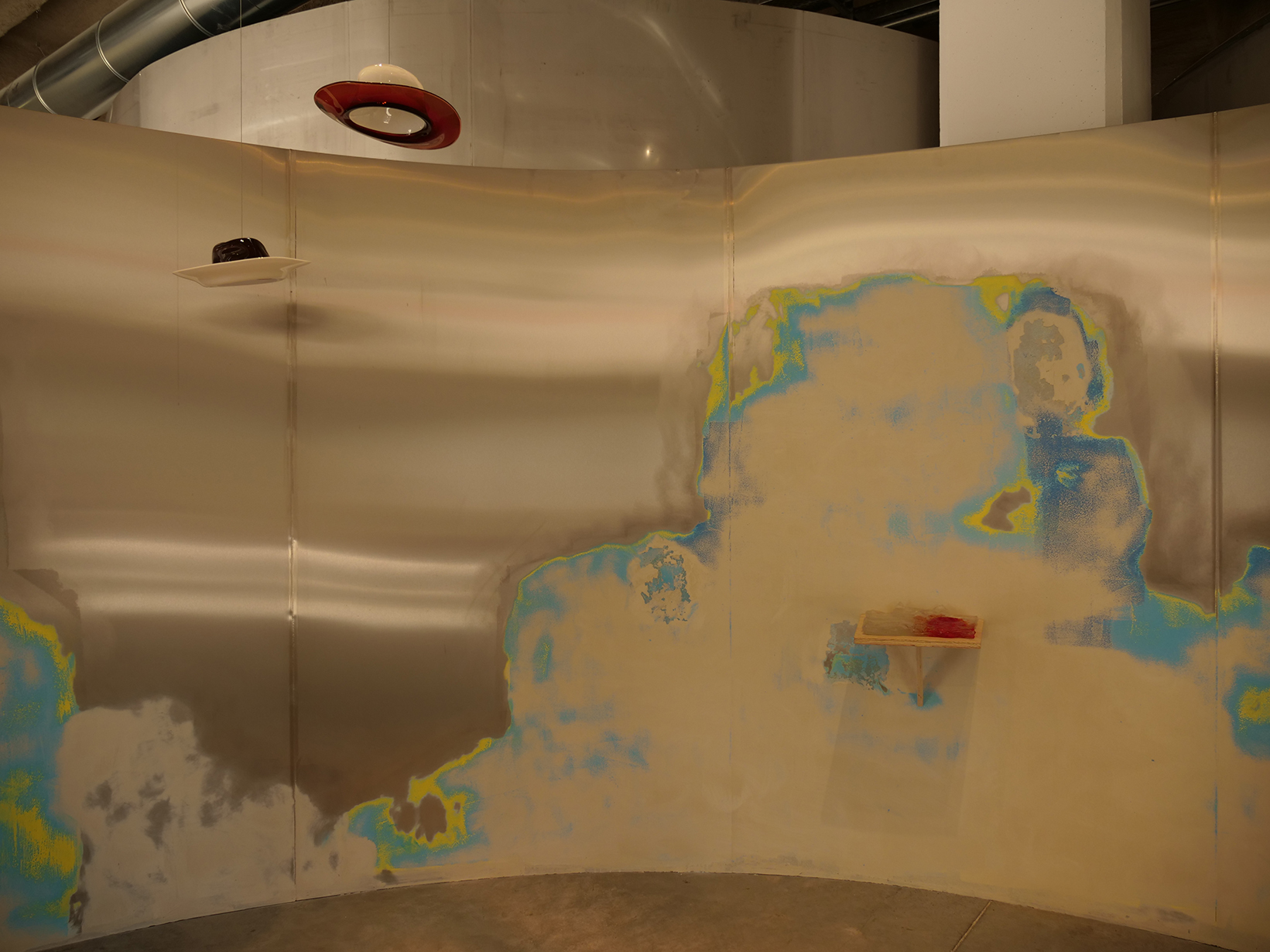 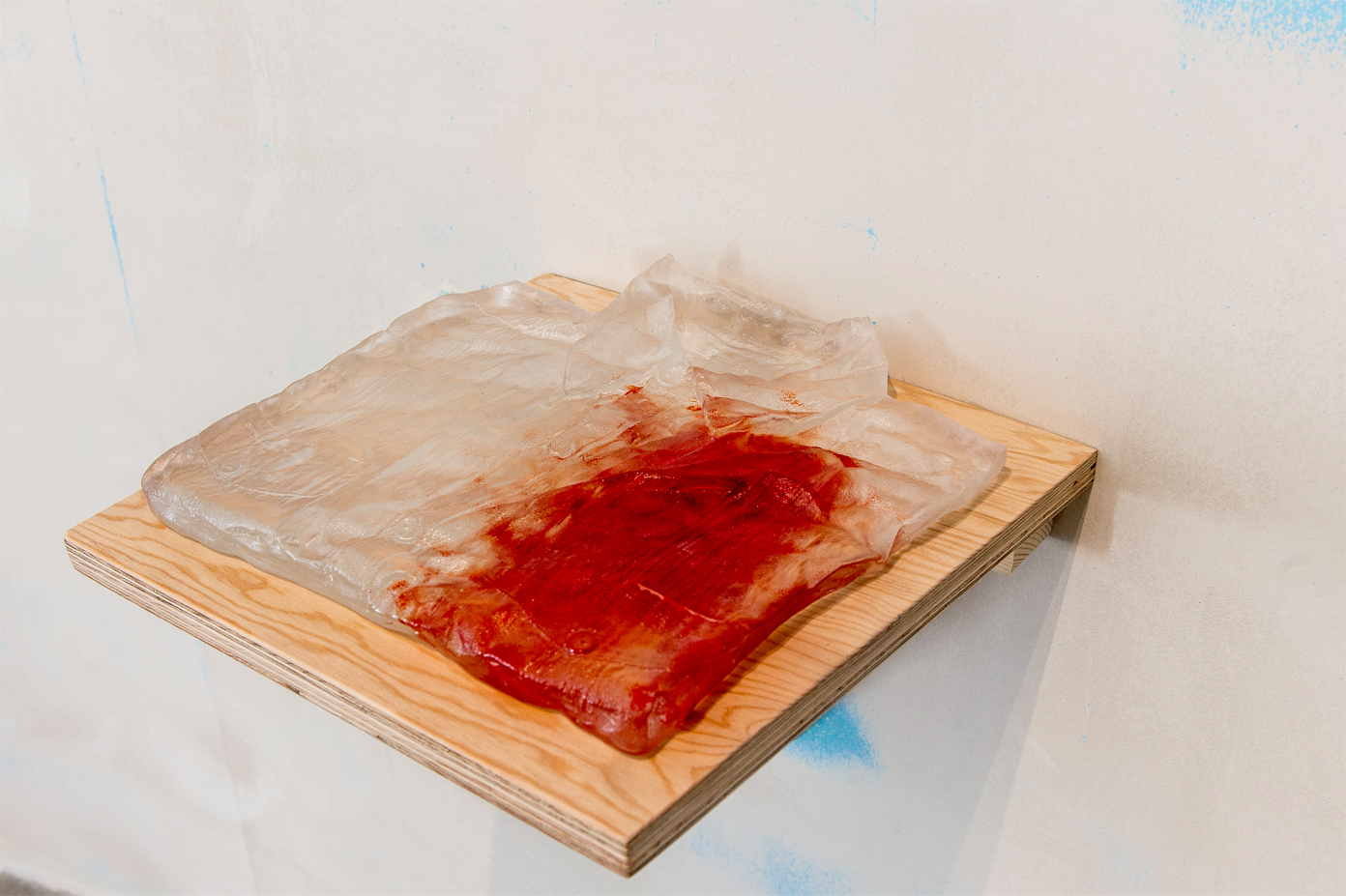 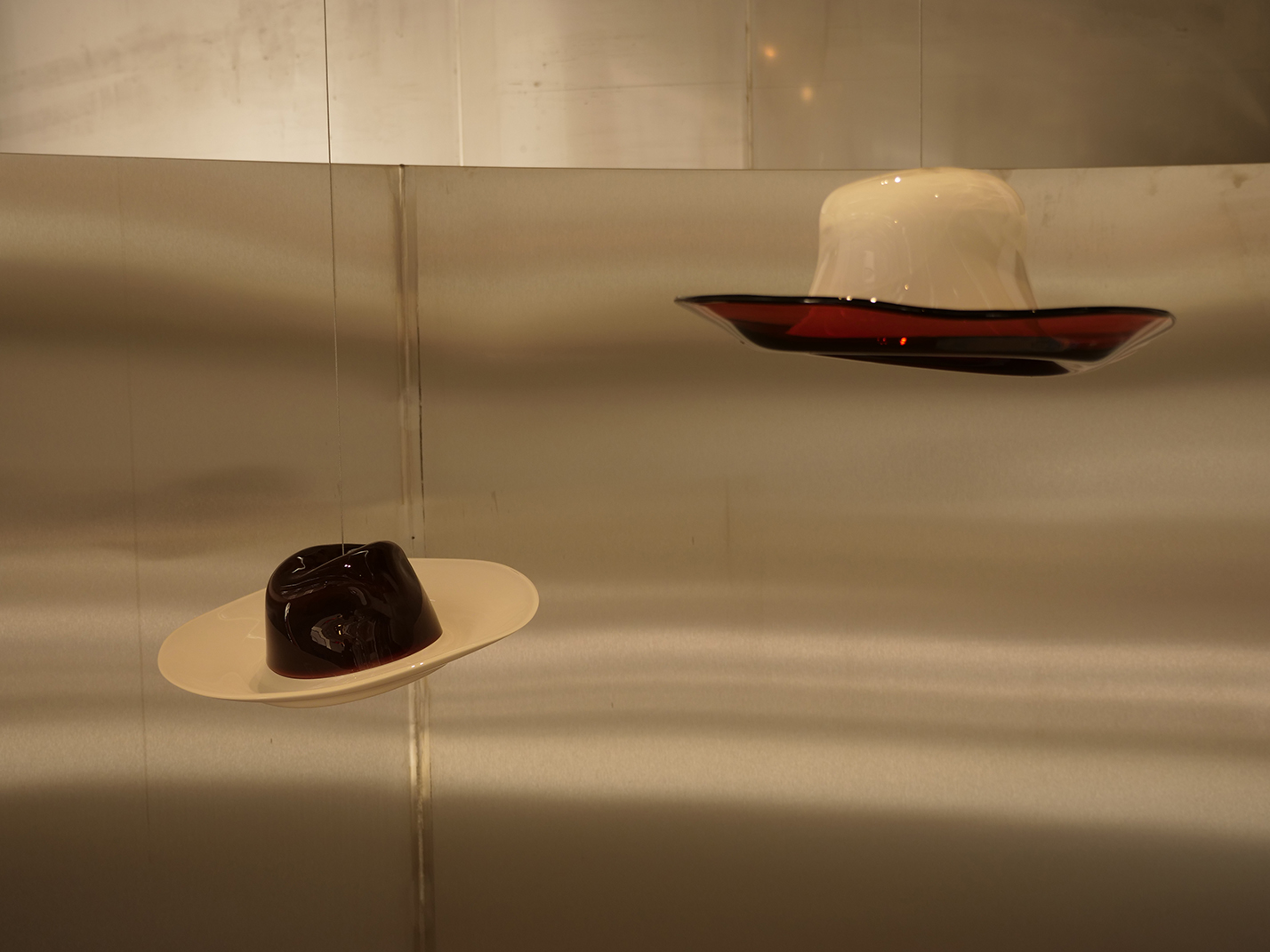 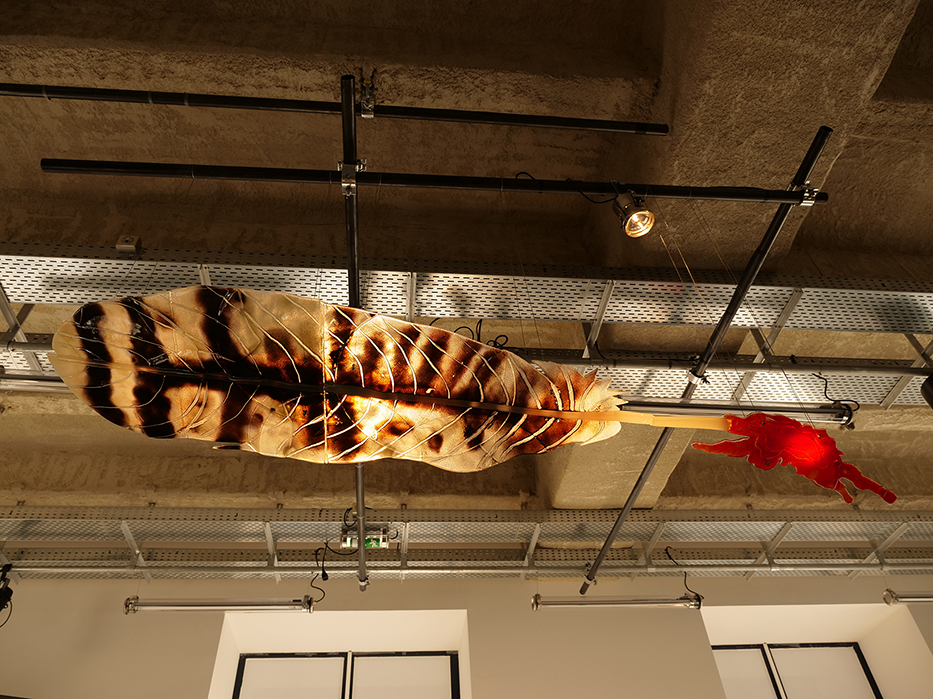 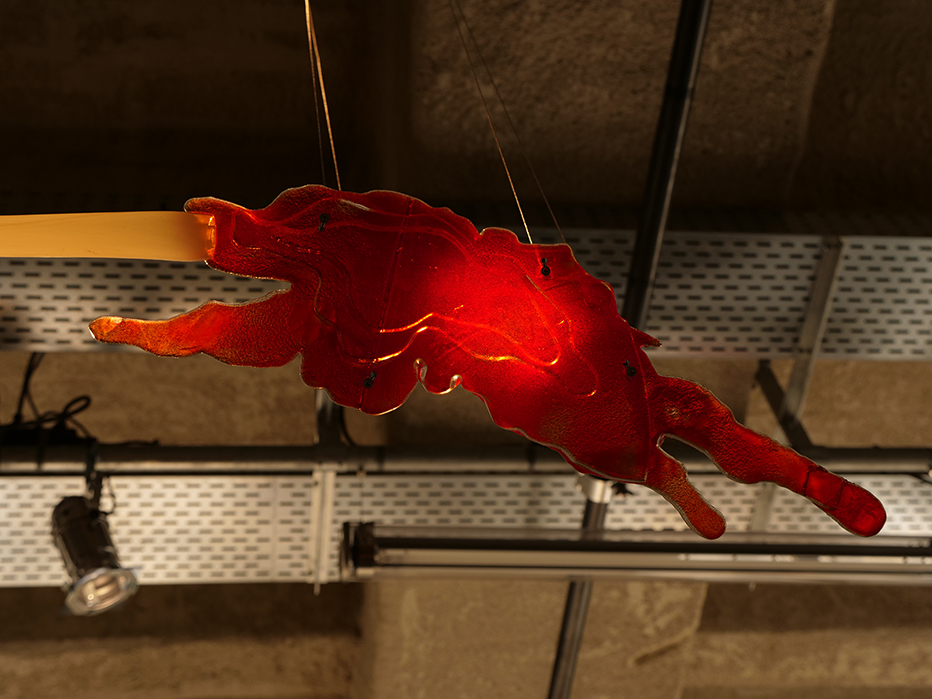 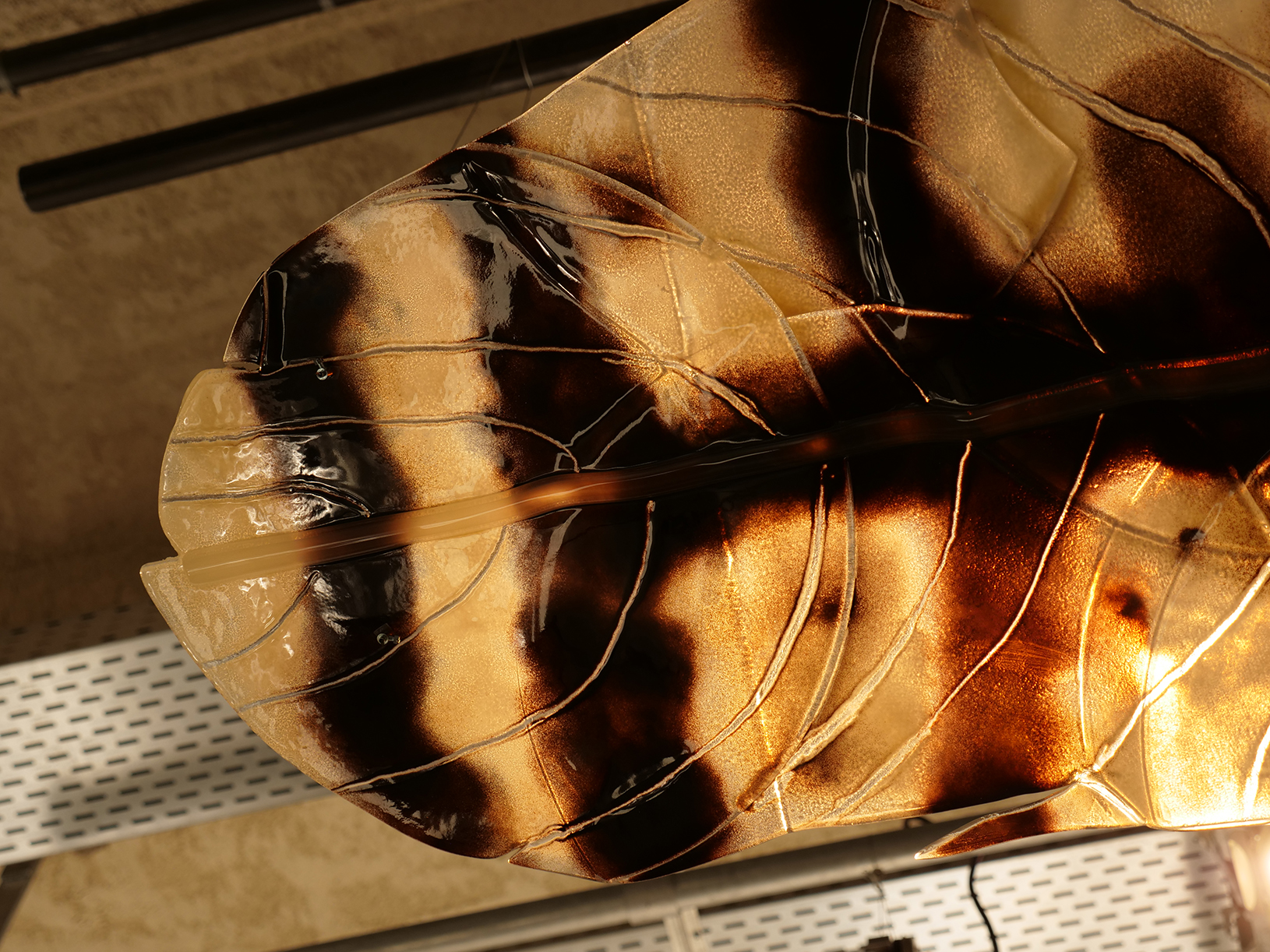 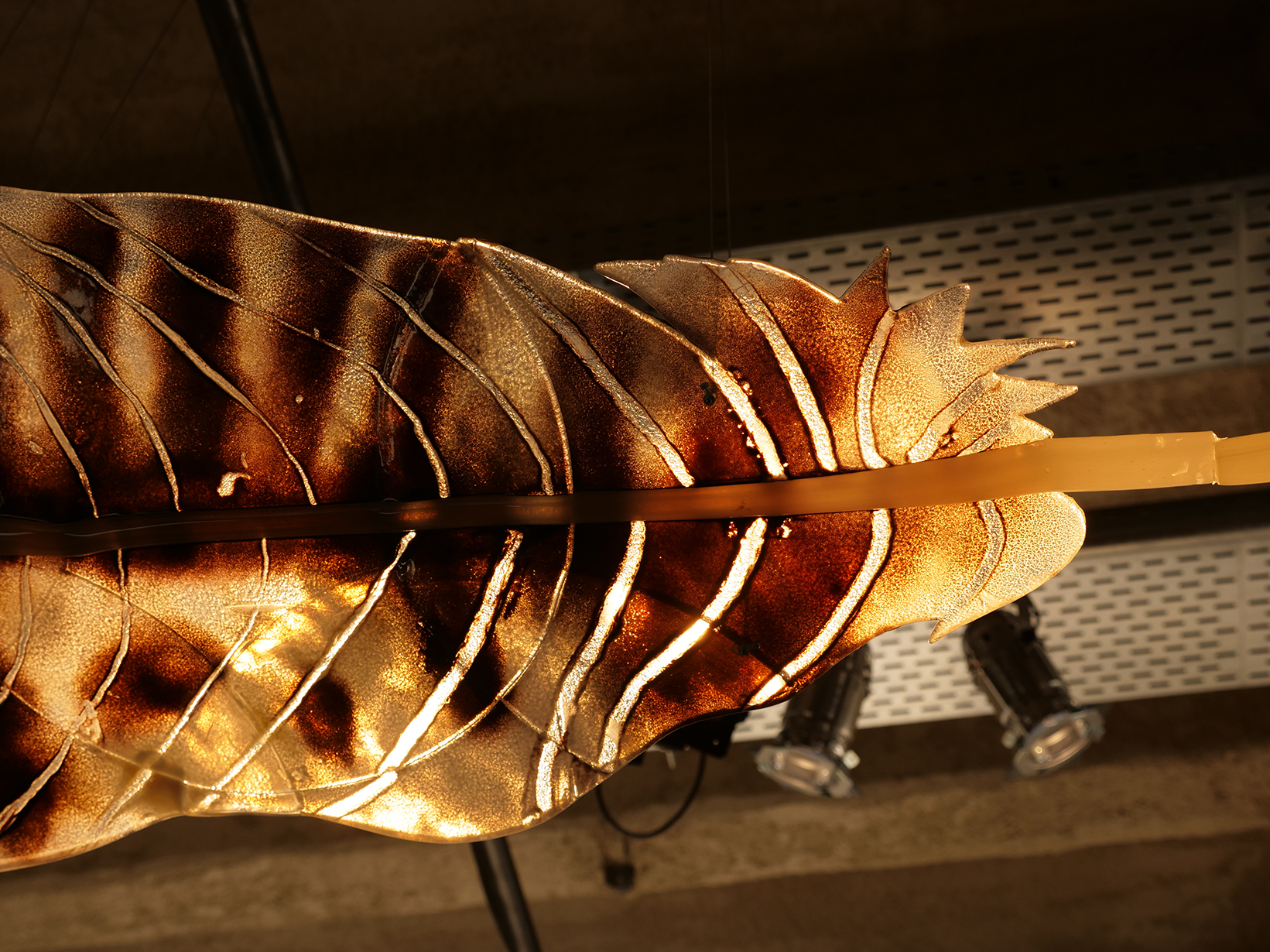 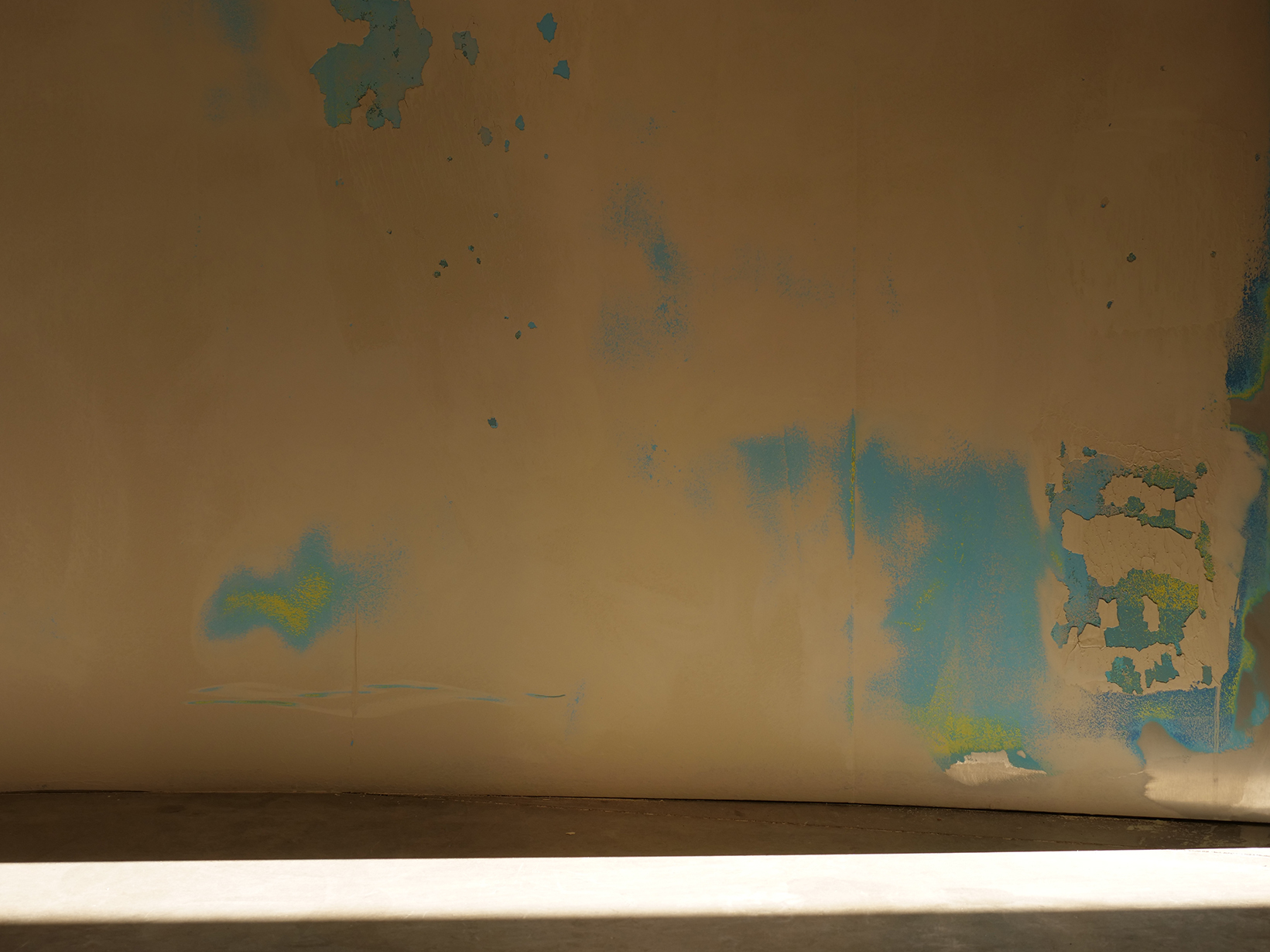 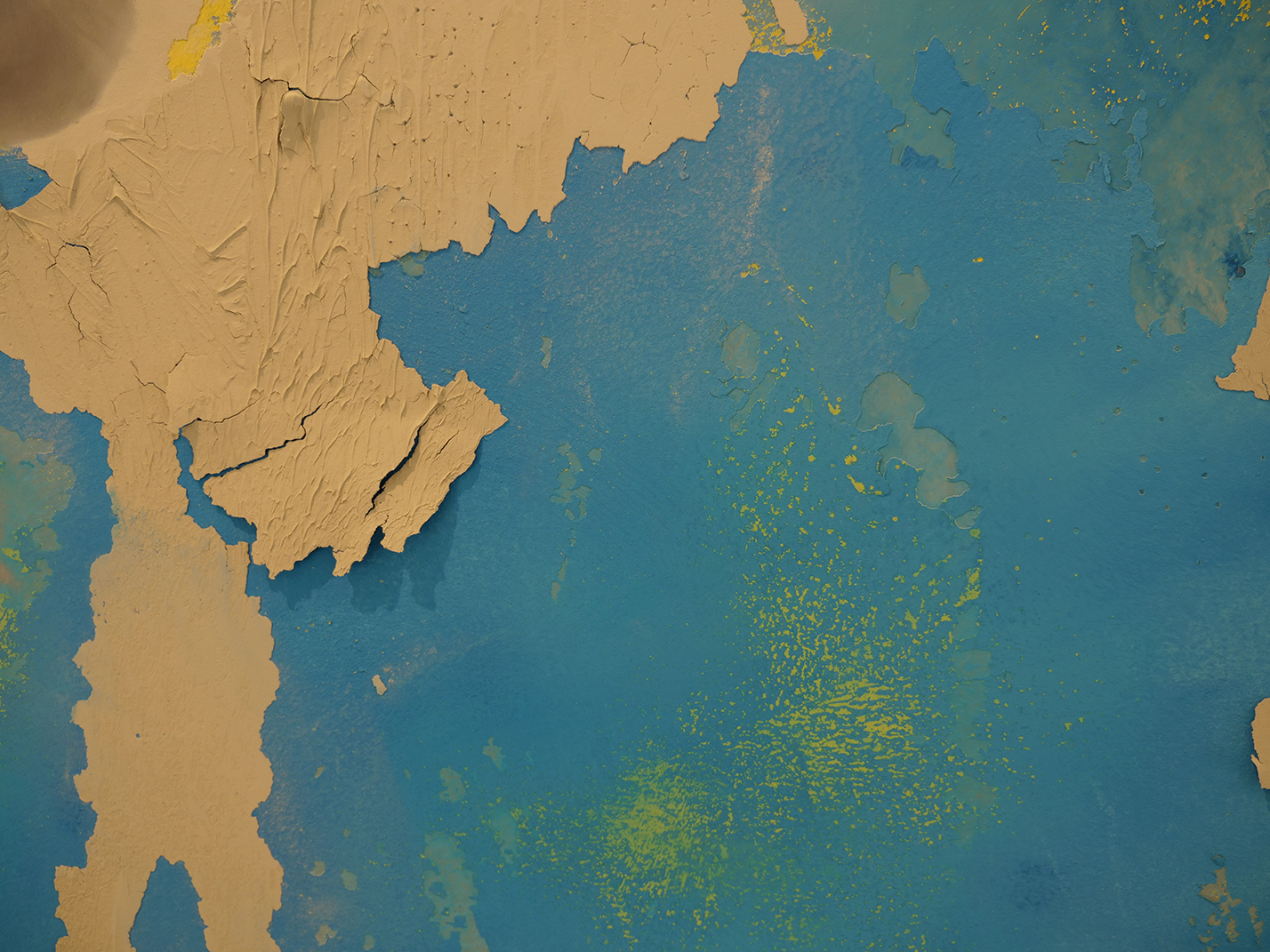 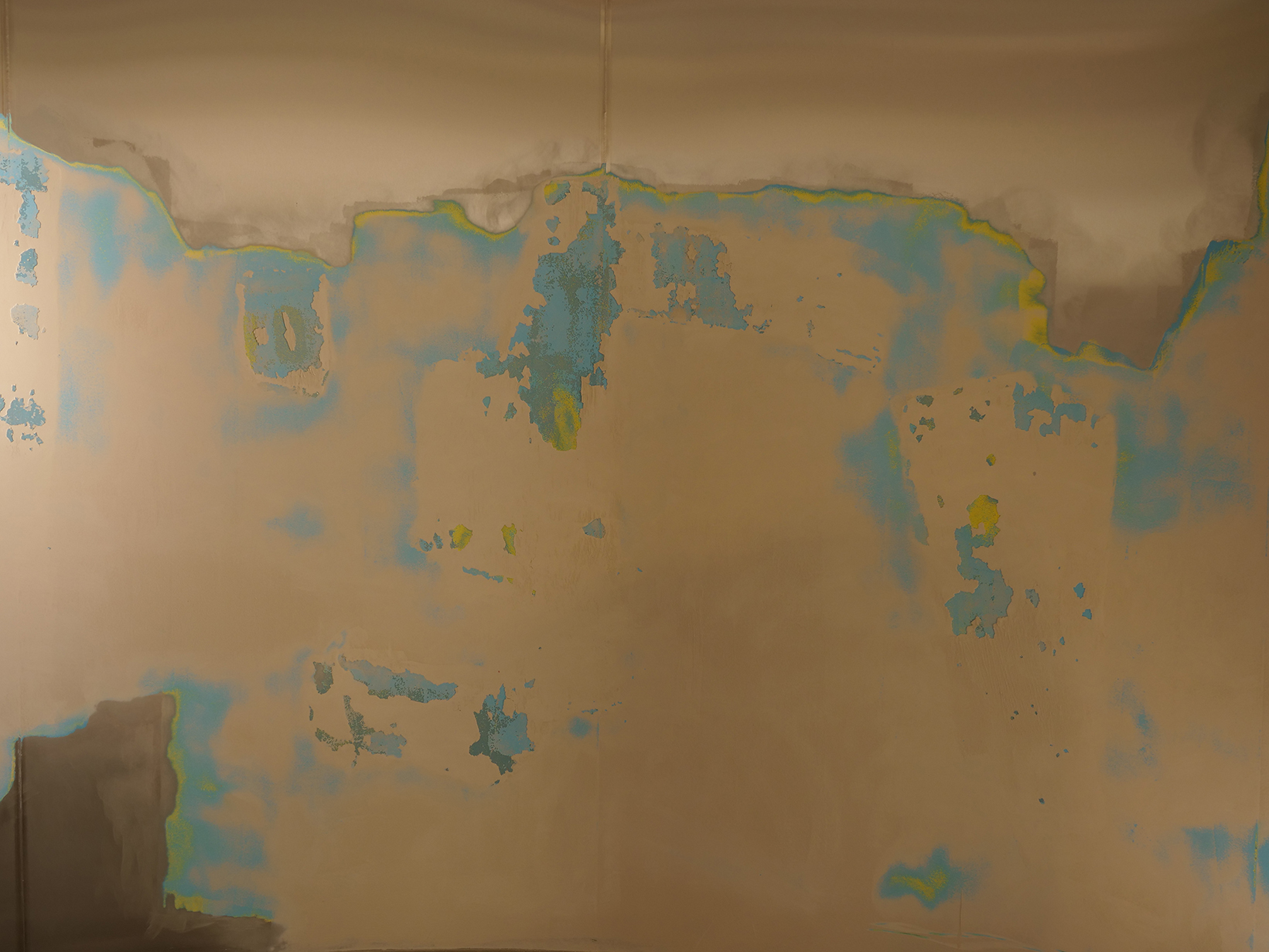 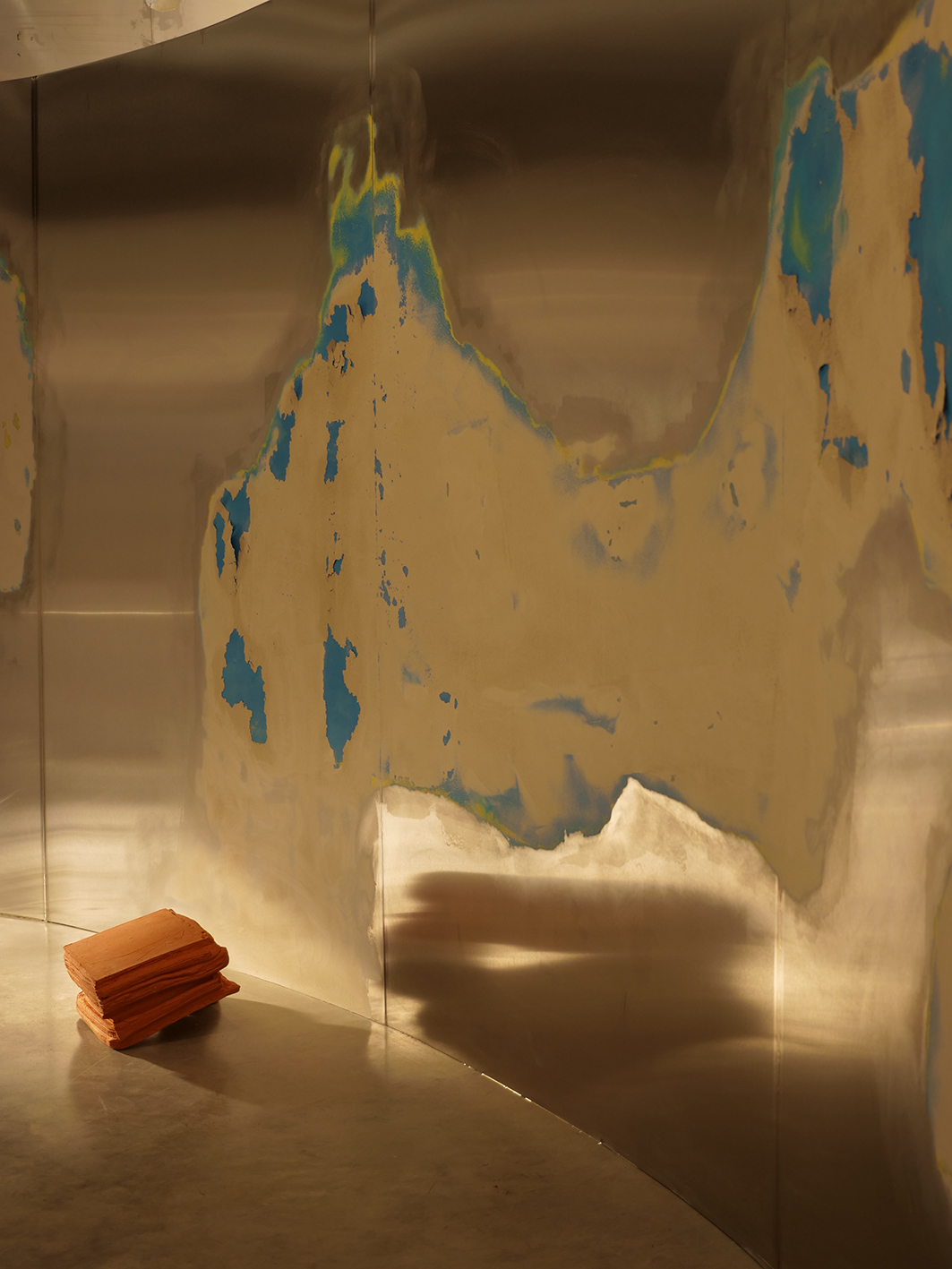 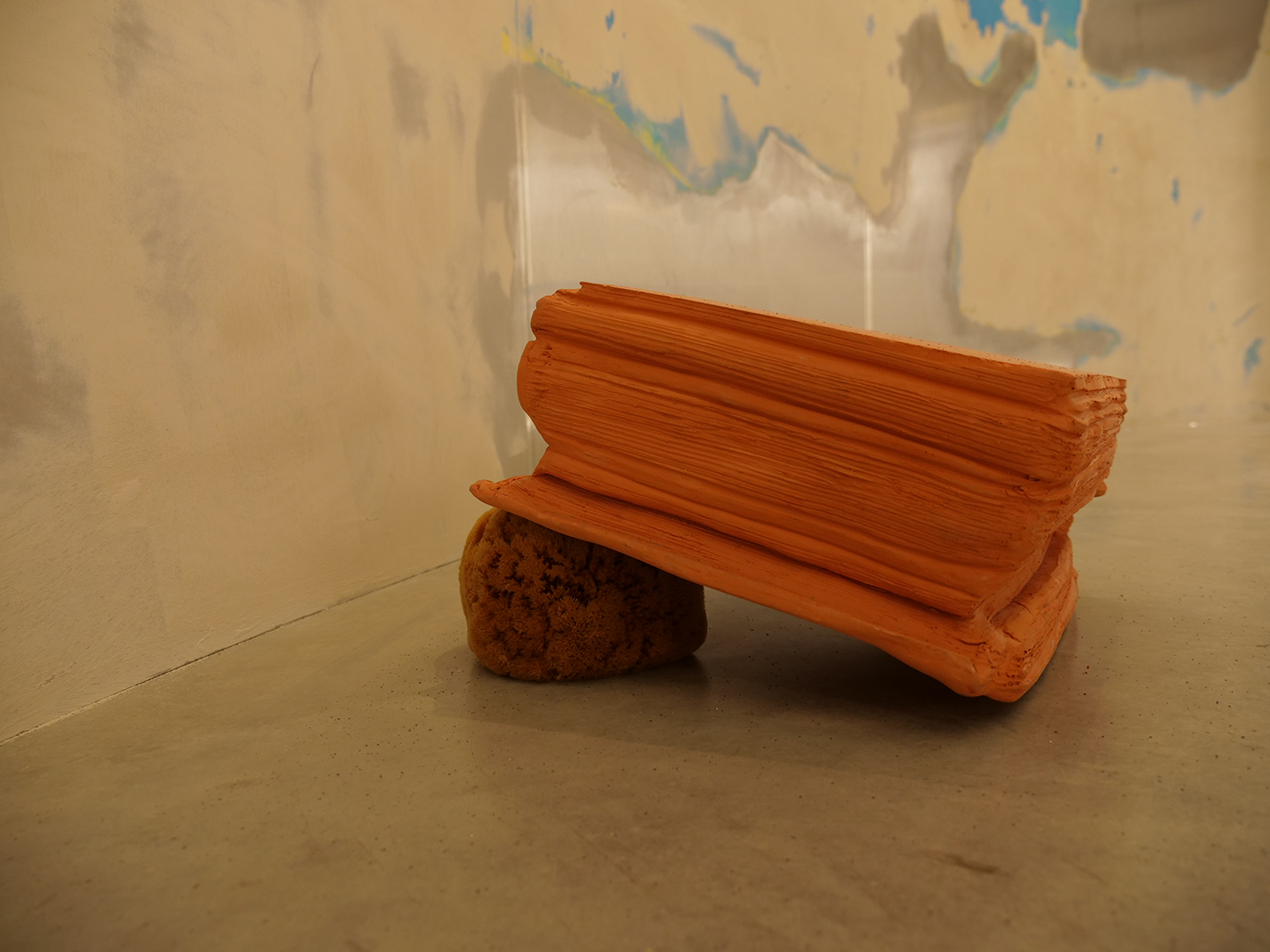 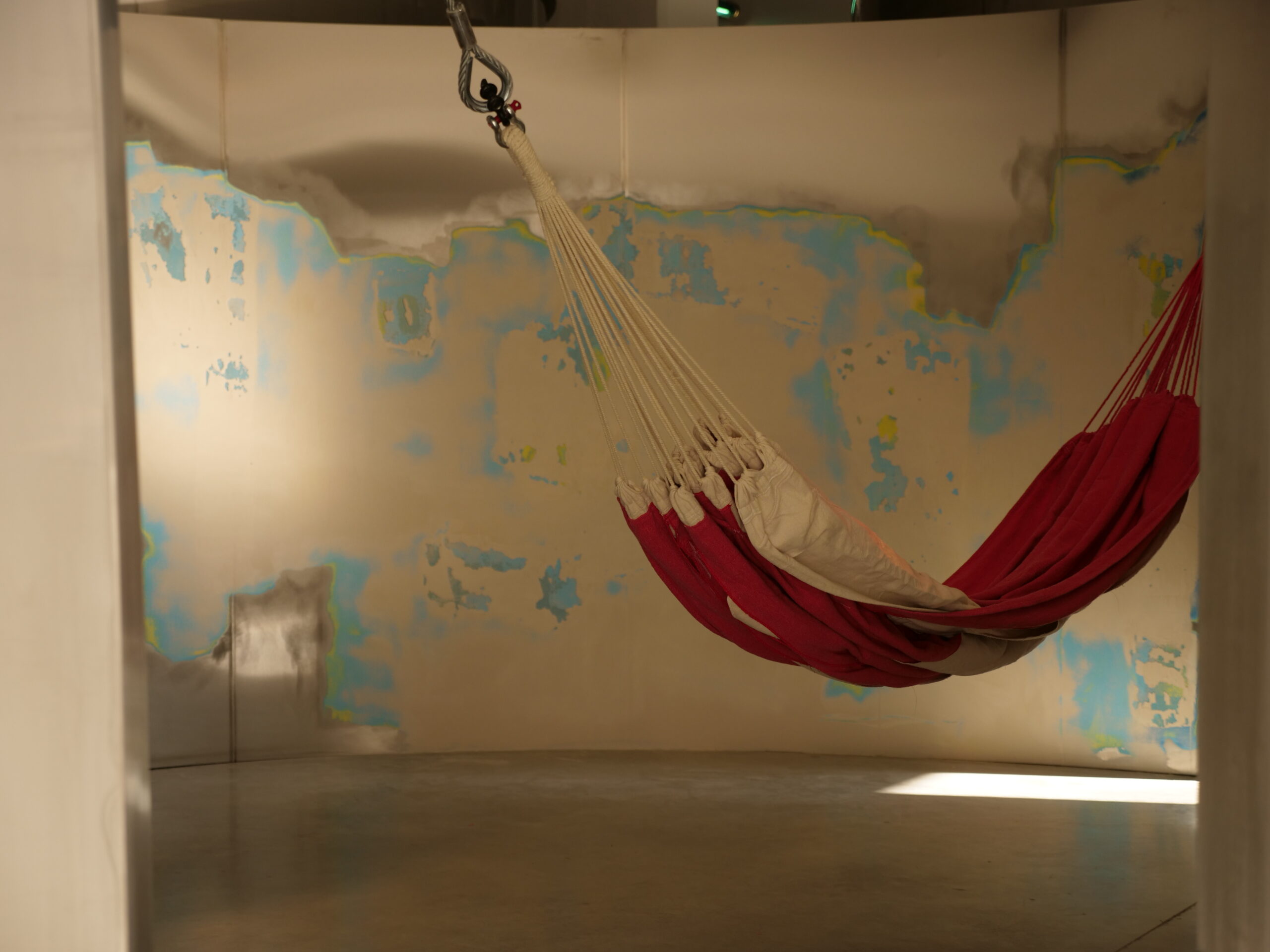